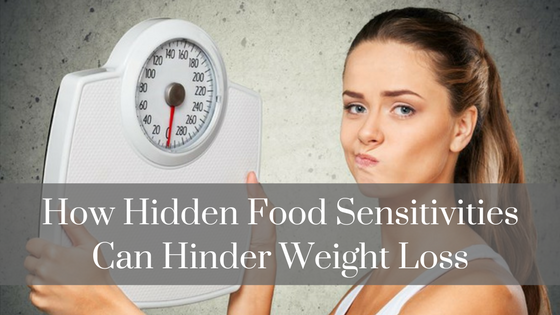 Is there anything more frustrating than eating a healthy diet and exercising daily only to have the scale read the same number again and again?  Commence the smashing of scales. I’ve been there, when you feel completely defeated, you are trying to do everything right and it’s still not working.

The truth is food is more than calories. Food is information that our digestive system has to decode. And sometimes those messages are ones that raise the alarm and cause inflammation, even in perfectly healthy foods! This happens to foods to which you have a food sensitivity.

Food sensitivities are different than food allergies. Food sensitivities can often fly under the radar because they don’t produce an anaphylactic reaction with breathing difficulties or a rash like a food allergy does. However, sensitivities still produce inflammation and cause problems. The inflammation is produced in response to a protein in the food that has inappropriately crossed the intestinal lining in your gut and triggered an immune response. In other words, your body’s alarm system (i.e. the immune system) gets turned on when it detects what it thinks is a harmful invader in your bloodstream.

How does this happen?

First, you need to understand that our intestinal lining is our first line of defense against foreign invaders like bacteria, viruses, toxins, etc. It is made up of epithelial cells just like our skin, which keeps germs from getting inside our bodies, but it is only one cell thick. When we have proper digestion and sufficient stomach acid the food we eat gets broken down into small molecules that get absorbed across the intestinal lining to be transported throughout the body. This is what is supposed to happen.

However, we live in a not-so-perfect environment for good digestion. We live stressful lives, eat on the run, consume processed foods and live in a modern environment that does not support good digestion. All of this hinders our bodies ability to break down our food into smaller molecules. These partially digested food particles then damage the gut lining. (1)

Some of the proteins in modern foods can also cause damage directly to the gut lining. For instance, gluten is a protein found in wheat that can increase intestinal permeability to varying degrees. This occurs in some people more than others and can lead to a ‘leaky gut’. (2, 3)

These ‘leaks’ can then let the partially digested food particles through triggering the immune system or allow bacteria through which really ticks off the immune system sounding a bigger alarm. (4)  Once the immune system is activated, messengers in the form of inflammatory molecules are released into the bloodstream and circulate throughout the body causing a cascade of negative effects. (5)

These Inflammatory molecules can negatively affect your metabolism regardless of how many calories you consume. (6)  In other words, when you have circulating inflammation in your body, it sends a signal to slow down metabolism and conserve energy causing you to gain weight. (7)  This means you will also have a harder time losing weight even when you are cutting calories.

The cascade of negative effects from improperly digested food can also alter the balance of gut bacteria. The bacteria in your gut play a significant role in regulating your body weight. (8) (Please note: The gut microbiome is a vast topic that I will address in another blog post. So stay tuned for more on this topic next month)

You may not be aware of the inflammation produced in your intestines when you consume foods your body is reacting to. Most people don’t have gut symptoms in response to food sensitivities because the inflammation settles somewhere else in the body. Thus, you may not be aware you have an issue or you may not associate your issue with food. The best way to determine if a food is causing an immune response is to do a food sensitivity test.

I prefer to use the Mediator Release Test (MRT) because it indirectly measures the inflammatory molecules produced in response to food and looks at both innate and adaptive immune responses. In my opinion, the MRT is the best food sensitivity test available. Oxford Labs reports the MRT as having greater than 90% reliability, with 94.5% sensitivity and 91% specificity.

Once you know exactly which foods are causing inflammation, you can remove those foods from your diet, and begin the gut healing process. I have had great success with clients who reached a plateau in their weight loss journey and then began to lose weight again after removing the foods they were reacting to and implementing a gut healing protocol.

If you’ve reached a weight loss plateau, you may benefit from food sensitivity testing. The concept of food sensitivities isn’t well understood among conventional medicine practitioners. You will want to work with a knowledgeable health practitioner to help you get the most out of this type of testing.

Also, if you found this topic informational, please share it with your friends. 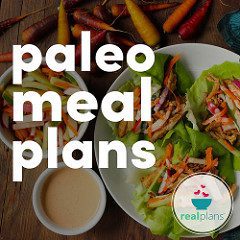