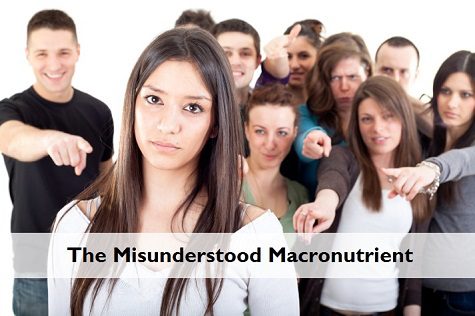 Picture yourself walking down the street and you get that feeling that you are being watched.  You turn to look and your eyes meet the contemptuous stares of those around you. You think, “Why are they judging me?  If they only really understood what I was all about.”

I’ve felt this way at times. And I have to admit that I’ve been on the other end too. Humans are so quick to judge without regard for the truth.  We largely do this based on superficial information, something we’ve seen or heard. However, there comes a point when you realize what you think or believe may not be what is true and it’s up to you to figure out what is.

The day I found out I believed a lie was eye opening for me. I realized my judgment was misplaced. At first I was excited to find out the truth. Then I was angry that I had been lied to by so many people I trusted.  The lie I had been told was about fat. Fat is bad for you. Fat makes you fat. Fat will give you heart disease. It was all a lie.

The truth is fat is essential to health. Fat is a necessary part of every single one of our cell membranes. Our cell membranes are made up of a phospholipid bilayer of fatty acids and cholesterol, and it plays a critical role in the cell’s structure and function. A flexible membrane needs the right balance of fats in order to function correctly and control what goes in and out of the cell. Too many of the wrong type of fats will disrupt the nutrient transport and signaling across the cell membrane. We need properly functioning cells in order for our tissues and organs to work well. We need properly functioning tissues and organs in order to maintain the health of the whole organism. Our health directly depends on how we are functioning at a molecular and cellular level.

Fat plays many important roles. They are the slow burning sustaining fuel for our bodies and are more efficiently used as fuel by the heart. Yes, fats are good for the heart. The idea that saturated fat contributes to heart disease is one of the greatest scientific deceptions of this century. The diet-heart hypothesis was first proposed by one man, Ancel Keys, in 1953.(1) This hypothesis so greatly appealed to the political and medical establishments at the time accepted it without proof.  They were desperate for answers to this new killer.

Prior to the 1900’s heart disease was a rare condition. It wasn’t described in medical literature until 1912.(2) Since then, heart disease has become the number one killer in America. The authorities were scrambling to find answers and a way to quell this epidemic, so they jumped on the first idea that made sense to them. The problem was this idea was flawed from the beginning and it has taken over 50 years to disprove it at the top level. We now have scientific evidence there is no correlation between saturated fat and heart disease.(3)  Unfortunately this detour could have all been avoided if we would have paid attention to the people who had already figured that out.  We could have spent the past 50 years researching the true cause instead of misguiding millions of Americans on what to eat.

Weston A. Price spent his retirement years traveling the globe and investigating the factors that contribute to health.(4) He discovered that the cultures who maintained their traditional diets rich in nutrient dense foods had robust physiques, excellent teeth, bone structure and radiant health. One of the common denominators of all the diets was the adequate intake of fat soluble vitamins from animal sources.  Many of these cultures consumed high fat diets, as much as 80%, and didn’t succumb to heart disease.(5)  For a scientific hypothesis to be sound, it must agree will all observations. The bottom line is we have scientific and historical evidence that saturated fat doesn’t contribute to heart disease. It’s time to put this lie to bed.  For more information on this subject I recommend Dr. Natasha Campbell-McBride’s book Put Your Heart in Your Mouth.

Now that you know the truth, does that change your outlook on fat? Let me know your thoughts by commenting below.

Are you still skeptical? I will be continuing this series on fats next week. Sign up below to get this information directly in your inbox.